Reviewing my garden’s evolution in this blog has been very cathartic. I guess you don’t appreciate all you’ve accomplished because it happens so slowly – unless you have buckets of money and a landscape crew to make ‘the miracle happen’! (But then – THAT would completely defeat what is magical and rewarding about being a gardener?!)

The timing for this blog probably couldn’t be better – because as I look out at my muddy backyard, crying out for more work, I’m getting SO restless to get back to it! The blogging distracts me from my anxiousness…. 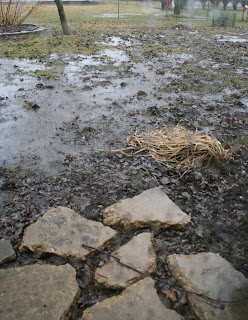 
As I re-read my garden journal, I realize what ‘therapy’ it was! Back on March 8, 2009 – I wrote 4 pages of notes! There were more entries in 2009 than all previous years put together. And as I was ‘Googling’ on every Zone 5 plant known to the human race – I started making Post-It notes to keep it straight! (Again, with the OCD thing!) 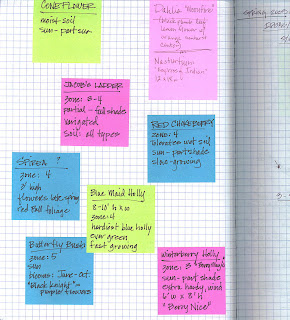 So, through-out the summer of 2009, with all this information banging around inside my head – I shopped! My little Sportrac was always hauling something in the back of it! Here are a few shots of some of my shopping treasures….. 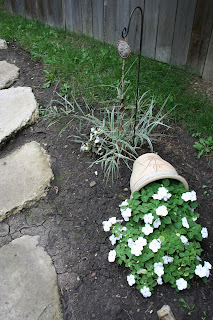 One of my favorite pots was damaged by the winter, but I found a new use for it – creating this image of a ‘spill’ of Impatiens in the Shade Garden. I can’t say the idea is original, but I’m not afraid to run with someone else’s creativity!! My pal Lizz, shared the perennial variegated grass behind the pot. We’ll see how it does this year?! 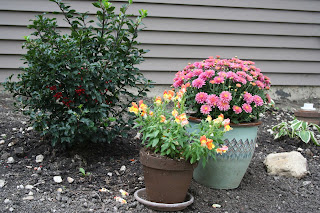 One of my new ‘anchors’ in the Front garden is this Berri-Magic Holly (female/male pair). This picture was taken in September 2009 – which would explain the flowering Mums (my annual guilty pleasure) and the sherbert-flavored Snapdragons. The small Patriot Hosta in the background is a transplant from under the Redtwig Dogwood (backyard), where it never seemed to flourish. I’m hoping the new environment, plus fresh compost, will encourage renewed energy?

This was the progress of the Front Garden by the end of September 2009. The Purple Smoke Bush (Tree?), Emerald Green Arborvitae and Berri-Magic Holly were in place – hopefully taking root in preparation for 2010. I also added Karl Forester grasses and a sweet little Dwarf Fountain Grass for texture and movement, and two varieties of variegated Hostas (Patriot and Fire & Ice) for punch. 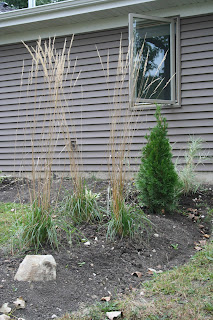 I can’t wait for the growing season of 2010 – to see a more mature Karl Forester grass trio. I’m still heart-broken about my little Emerald Green Arborvitae! As I mentioned a while ago – the bunnies decimated both new bushes over the winter…But as I have learned from many of you – bunnies are ‘peanuts’ compared to deer (just blogged in illic est haud equus quoque mortuus barruo) and wallabies (as shared by ‘My Dry Tropics Garden!) 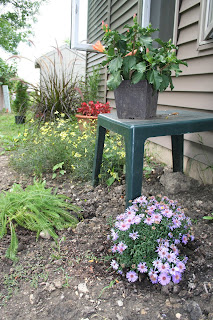 This is the fall (September 2009) view of the Sun Garden (the only full-sun spot in the backyard now). It’s a blend of old, new and annuals. I’m a guppy for Asters, so this New York Aster in lavender was a ‘must have’. Next to it is some Paprika Yarrow that has grown with me for the last 5 years! Fortunately it naturalized itself – with no intervention from me! I’m happy to say that cute Hibiscus, unadorned in its original nursery container, is alive and well in my family room (‘Great room’ to some). Those ‘darlings of the garden’ – the Moonbeam Coreopsis were ‘non-negotiable’ when I was on one of my shopping excursions.
I’m still in the process of amending the soil. The 5” veneer of topsoil (provided by the contractor at the end of the project) didn’t go very far once I started digging the garden. I’m up to my eyeballs in clay, stones & dandelions! And as anybody in a ‘clay’ zone knows – it’s like digging up greasy concrete!! Arg! But – as I walked around the yard recently, I did spy early-season risers, so I’m stoked! And growing season 2010 is “on”!