The (plant) Will to Survive...

Now that the existing plants in the gardens have been strategically be rearranged, I've been on a mission to start picking off/purchasing the plants on my "2011 Wishlist".  As I've been rooting through my garden tools, my husband started straightening the garage.  Low and behold he uncovered this...... 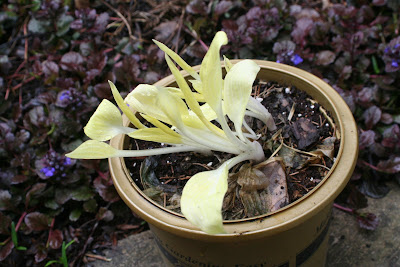 This poor thing had been buried under a stack of 'stuff' by the lawnmower.  It's been buried - alive, smashed with something on top of it, covered in darkness for at least 6 months (...just a guess??...) with no water!  I feel terrible!!  How could this have happened?!?  It's lack of photosynthesis makes it tricky to identify.  There are very few 'key indicators' of what it might be - other than it's leaf structure.  It didn't have a plant tag and looks more like a 'friend gift' than a purchase (which makes me feel even more neglectful).  So, I immediately brought it outside in the light and gave it water.  It resembled a Hosta, so it's sitting over in part shade - just in case.  I'll post updates on it's recovery (wouldn't the joke be on me if it ended up being a weed?).

Obsessing over the extended forecast for the last couple of weeks, waiting for a decent weekend - I decided to seize the moment and took last Tuesday afternoon off.  First stop - the garden center at Lowes to see what was what.  There was a gift card burning a hole in my wallet.  I found a couple of Weigela - to set as book-end anchors in my "Sun Garden".  There was a Patriot Hosta with my name on it, for the new garden under the front bay window.  It will take your eye from the West to the East in the front yard.  Then there were (3) little lime Sweet Potato Vines that said "buy me" - so I did.  Who can refuse a $3 plant?!   After the heat of an unseasonably warm (92 degree) day, I spent the late afternoon planting.

The weather crashed and burned this weekend, but that did not dissuade me from hitting one of my favorite nurseries yesterday.  In the cool 55 degree wind and drizzle, I wandered around Platt Hill Nursery with a cart.    It is highly recommended to come prepared with a list of plants that you want to buy - for two reasons:  (1) you never remember what you need without it, and (2) it slows temptation to buy everything you see!  My eyes are always bigger than my budget - so I bring 'cash only', to slow the insanity.

By the way, after rubber-necking a fellow plant shopper's cart, THIS was an impulse buy.... (and I swear, I was not stalking her cart - pinky swear!)

I only made it partially way through the "sun plants" list (with the exception of the Anemone) before the cash/math said it was time to stop.  Looking at those treasures - just waiting to be planted - gives me an adrenaline rush.  Today will not be that day.  It is currently 44 degrees, cloudy/rainy with 30-40 mile-an-hour winds.  It's gloomy out, but there were still some photo ops in the garden....

In quick summary, here are a few other plants 'in progress' on a cold, windy day.... 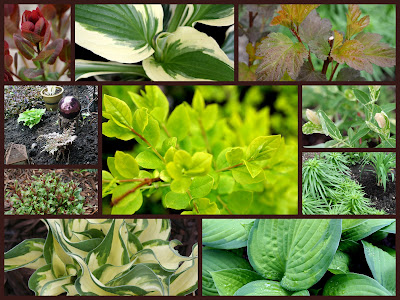 Here's to garden planting ... sooner than later would be nice!
Posted by Shyrlene at 3:53 PM