I debated on the best title for today's post - it started as "My Aching Back", but that would sound like whining.  The weather this weekend was perfect for getting a lot accomplished in the yard.  "Skipping school" (aka taking a vacation day) on Friday, I got an early jump on garden aspirations.  Platt Hill Nursery was calling my name - and there was a flat of Cosmos that said "buy me".  Then there was an iridescent Fuchsia that was too exotic to resist... and the purple Potato Vine(s)... and on and on!  (and that was only Friday morning) 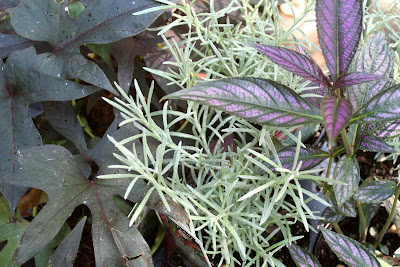 The raw materials - waiting for a home in the sun! 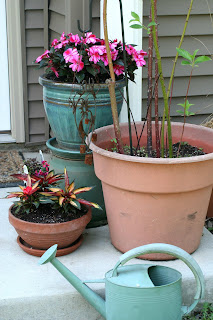 Love the "POW" of color... both the New Guinea Impatiens and the Fuchsia 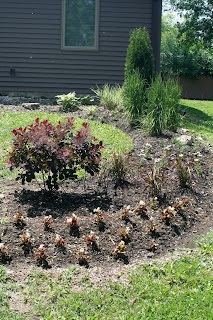 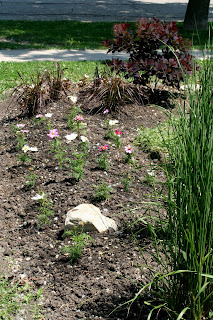 I added 'Champaign' Wax Begonias, Purple Fountain Grass and a full flat of mixed Cosmos in the front garden.  It stirred up a lot of neighborhood feedback!  I think they were happy to see something else besides dandelions.  As you may recall, for more than 20 years the only thing in my front yard were overgrown Arborvitae and a Juniper that looked like Godzilla! 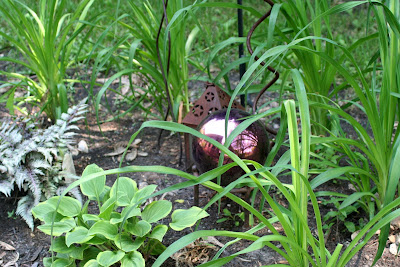 The 'Shade Garden' is growing well - though the Maple Tree 'helicopters' are starting to sprout so I need to rake them up (it's always something!).
Something that makes me smile... 'Visitors' in the neighborhood 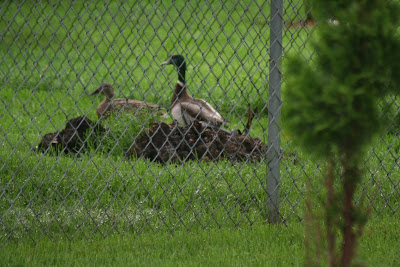 Something that makes me sad.... an unwelcome guest (that won't leave)

After some significant research, it appears my Ninebark has powdery mildew.  It had it last year, and I kept cutting off nasty 'fuzzy' areas like this (that appeared infected) and hoped winter would kill the disease.  Now it's year two - and it's looking bleak.  Ms. McG gave me some great suggestions, and I hosed off the plant.  Unfortunately, once it dried - the spots were back and I noticed this new growth, covered in fuzz yesterday afternoon.  The bush is covered in spots, splotches - including new growth - so I think it's time to cut my loses.  (I hate to lose one!)