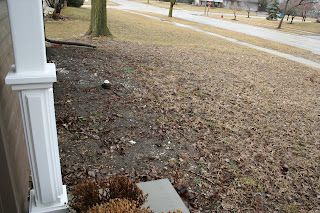 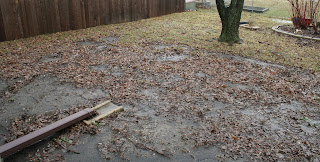 (See those Redtwig Dogwoods in back, with a potted perennial – not so inconspicuously hiding behind it?)

Even the bunnies were coming to the door going --- “Hello! What is up with this mud slick, my babies are hungry!”  (You think I kid about this?) 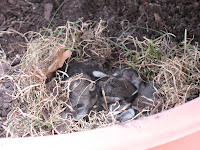 April 2007 – this was in the big pot on our back deck. Bunny Foo Foo opted to ‘repurpose’ it for a bunny nest. My daughter went crazy – with lots of “oh’s & ah’s! She actually took this shot. But once Mama Bunny saw us checking out the babies through the window, they disappeared over night. The ‘Bunny Buffet’ had become the “Bunny Bed & Breakfast. (But I digress…)

I had been tirelessly researching plants, clipping pictures from garden magazines with garden features I liked, and drawing up garden plans on graph paper. Yep, I borrowed my daughter’s colored pencils too – it was great therapy! 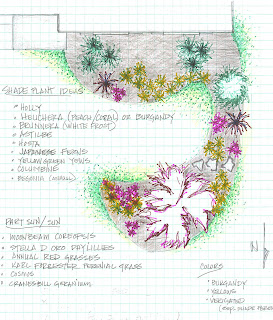 This was one of my sketches for the garden in the front yard. 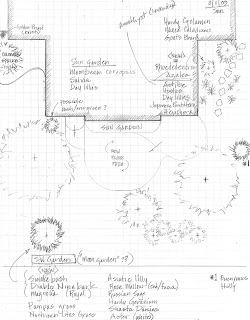 Another sketch for the backyard – didn’t get to color this one! I was even roughing in an idea for the shape of the paver patio. I have a whole other set of drawings for that!! But this gives you an idea of my thought process.

The planning started with target areas for where I wanted gardens. Then what did I want for “anchor” plants? Would they be bushes or large perennials? And WHAT grows fast – but isn’t invasive?

(Deep cleansing breath … don’t freak out! This was usually where my husband would step in and say something profound like, “Relax! Remember, you don’t have to do it all in a day! If it was done in a day, what would you have to do each year – for the rest of your life?”  Ha!  Goes to show what he knows?!)

So in the spring and summer of 2009, I paced myself with the ‘cash & carry’ concept. If I had ‘cabin fever’ and there was some extra cash in my wallet – I would go to one of my favorite nurseries and window shop for plants. After months of planning & garden ‘journaling’ about the yard, it felt refreshing to be spontaneous! I knew I wanted to start with the ‘Shade Garden’ next to my 3-Season room, since that was where I spent the most of my time.

Here are the initial results: 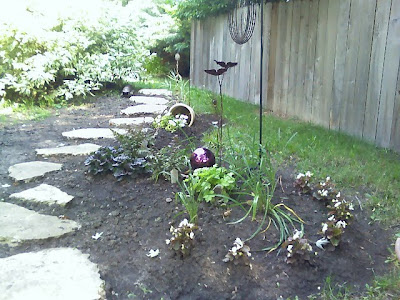 I am very proud of the stepping stones, as I mentioned in a previous blog – they were repurposed from the sidewalk that was demo’d during construction. Again, my husband handled that ‘big job’ – God bless him!
Posted by Shyrlene at 11:11 PM